American Journal of BioMedicine by Author is licensed under a Creative Commons Attribution 4.0 International License. Based on a work at https://ajbm.net/ghrelin-reduces-…mmatory-response/.
Permissions beyond the scope of this license may be available at https://ajbm.net.

Several anti-inflammatory techniques and pharmacological agents (largely aimed at coping with CPB) have been used in recent years in cardiac surgery; these include leukocyte filtration, corticosteroids, heparin [7, 8]. Despite the relatively small number of studies investigating the effects of reducing the inflammatory response to myocardial reperfusion injury, the majority of these studies has shown evidence of myocardial protection [9]. Ghrelin is an orexigenic hormone identified as an endogenous ligand for the growth hormone secretagogue receptor (GHSR) and discovery after of the growth hormone secretagogue type 1A receptor in 1996 [10] and was reported by Masayasu Kojima and colleagues in 1999 as peptide of 28 amino acids in rat and human stomachs [11]. Ghrelin levels increase before meals and decrease after meals. In addition, smaller amounts of ghrelin is also produced by other organs, such as heart, lung, kidney, pancreas, placenta, lymphatic tissue, gonads, thyroid, adrenal, pituitary, hypothalamus [12,13].

Recent research has shown that there is an association between systemic ghrelin levels and cardiovascular indexes [14], in one study showed that ghrelin can dose-dependently increase coronary perfusion pressure in isolated perfuse rat hearts and constrict isolated coronary arterioles, and this coronary vasoconstrictive action is dependent on Ca2+ and protein kinase C (PKC) [15]. In vitro a study, ghrelin has shown to prevent against the cardio-toxicity of adriamycin may be attributed to up regulation of TNF-α/NF-κB pathways, as well as its mitochondrial stabilization properties [16]. A study reported that, in anesthetized pigs, intracoronary infusion of ghrelin induced coronary artery contraction, thereby reducing coronary circulation and the mechanism of this response has been shown to involve the inhibition of beta 2-adrenergic mediated release of NO [17]. Thus, the exact ghrelin effects on coronary perfusion are inconclusive at present. Nonetheless, the beneficial effects of ghrelin on the isolated I/R heart may yet indicate a potential role for this peptide in prevention of I/R injury. The purpose of our study is to use a syngeneic murine model to evaluate ghrelin’s anti-inflammatory and cardio-protective potential. To accomplish these tasks:

1. We planned to assess the degree of myocardial injury following I/R by measuring serum levels of the well known cardiac injury marker troponin-I.
2. To determine if anti-inflammatory mechanisms are involved we planned to measure tissue levels of the known pro-inflammatory mediators (MCP-1, IL-1β, IL-6, and VCAM-1).
4. Evaluating the degree of leukocyte infiltration into the myocardium.

Male C3H/HeN mice, their body weight 22-32g, aged from 2-4 months, all of them are acclimatized in a quarantine room for 2 weeks. All experiments were approved by the Animal Care and Research Committee of the University of Colorado Denver, and this investigation conforms to the Guide for the Care and Use of Laboratory Animals (National Research Council, revised 1996).

Heterotopic heart transplantation was performed in adult WT C3H/HeN mice as previously described by others [18], [19]. In brief, grafting TLR4 mutant donor hearts were arrested with cold St. Thomas crystalloid cardioplegic; rapidly prepared for transplantation. Heart preparation entailed ligating all great vessels proximal, excluding the ascending aorta.  Following isolation donor hearts were subjected to 4-hrs cold ischemia at 4˚C.  Plasma from these donor animals was harvested prior to cardioplegic arrest and used for baseline analysis. Recipient animals are prepared by isolating the right common carotid artery and right external jugular vein as distally as possible. Next the vessels are gently everted over 1mm lengths of polyethylene tubing, which creates a rigid endothelial tube that can be introduced into the donor heart.

The cuffed common carotid artery and external jugular vein are introduced into the ascending aorta and superior vena cava, respectively. Animals in the treatment group received 100 μg/Kg IV ghrelin before the cross clamps are removed and the heart reperfused in a retrograde fashion. To assess the cardiac graft function, we blindly evaluated the gross findings of the grafts according to a scoring system based on the contractility (0, none; 1, moderate; 2, best), color (0, dark; 1, partially dark; 2, healthy), and turgor (0, hard; 1, soft) developed by Pinsky et al. [20] at 10 min and 3-hrs after reperfusion.

The OCT-embedded tissues were cut into (5μm thick) sections were fixed in 30% acetone and 70% methanol for 6 mints after air dry, wash with PBS three time for each time 3 mints, 4% paraformaldehyde, incubated with rabbit polyclonal antibodies against macrophages, and then incubated with Cy3-tagged secondary goat anti-rabbit IgG (imaged on the red channel). Nuclei were stained with bis-benzimide (DAPI, imaged on the blue channel), and glycoproteins on cell surfaces with Alexa 488-tagged wheat germ agglutinin (imaged on the green channel). Microscopy was performed with a Leica DMRXA digital microscope (Leica Mikroskopie and System GmbH, Wetzlar, Germany). Images were analyzed in a blinded fashion.

Myocardial tissue is homogenized with a rotor-stator homogenizer and treated with PBS containing 0.5% Triton X-100 and a protease inhibitor cocktail. Size fraction of crude protein (20 μg) was performed by electrophoresis. After transferring the membrane was incubated in PBS 5% non-fat dry milk to block nonspecific binding protein. The membrane was then incubated for 60 minutes with an antibody against VCAM-1 at 1:1000 to 1:2000 diluted with PBS containing 0.05% Tween 20 and 5% dry milk, after thorough washes the membrane treated with secondary antibody 45 minutes. Protein bands developed using an enhanced chemiluminescence technique. Densitometry was performed using a computerized densitometer (Molecular Dynamics, Sunnyvale, CA).

ELISA assessed myocardial expressions of well-known pro-inflammatory cytokines (IL-6, IL-1β, and MCP-1). Ghrelin attenuated the levels of cytokines and chemokine compared, to the animals subjected to I/R alone as in figure 3.

Figure 4. Show the Western blot of the myocardial adhesion molecule VCAM-1, by using NIH imaging software to normalize band densities of VCAM-1 to the loading control protein GAPDH, VCAM-1 expression was significantly reduced animals pre-treated with ghrelin versus to those subjected to I/R alone. 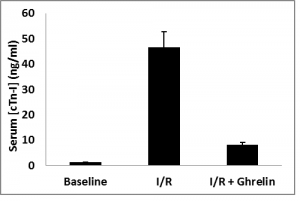 Figure 1. Plasma concentrations of cardiac Troponin-I were analyzed by ELISA from all animal groups. Ghrelin administration prior to blood reperfusion significantly decreased plasma concentration of cardiac Troponin-I versus animals subjected I/R alone. Data are expressed as mean±SEM; *P<0.05 vs. corresponding shame; #P<0.05, n=8 in each group vs. I/R without ghrelin treatment group. 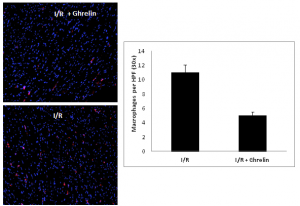 Figure 2. OCT sectioned myocardium from animals subjected to I/R and those subjected to I/R+ghrelin were evaluated for monocyte infiltration by immunofluorescence staining. Monocyte infiltrates were quantified by staining for CD-68 positive cells, represented as red in the images to the left.  Blue represents cell nuclei. The image in the upper left is a 10X image of animals subjected to I/R alone, and is compared to the image in the lower left, which represents a 10X image of animals treated with ghrelin prior to transplantation. The bar graph to the right represents a blinded count of CD-68 positive cells (red in color) in 30X high power fields for I/R and I/R+ghrelin animals. These counts illustrated significantly fewer monocyte in the tissue sections of I/R+ghrelin animals versus those subjected to I/R alone.

Figure 3. Myocardial expression three well known pro-inflammatory cytokines (IL-6, IL-1β, and MCP-1) were assessed by ELISA.The concentrations of all three pro-inflammatory cytokines were ameliorated by the administration of ghrelin prior to reperfusion versus the concentrations observed in animals subjected to I/R alone. Data are expressed as mean±SEM. n=8 in each group; *P<0.05 vs.  corresponding shame; #P<0.05 vs. I/R without ghrelin treatment group.

Figure 4.  Western blotting was performed for the myocardial adhesion molecule VCAM-1. Using NIH imaging software to normalize band densities of VCAM-1 to the loading control protein GAPDH, we observed a significantly attenuated VCAM-1 expression in I/R animals pre-treated with ghrelin versus those subjected to I/R alone. Data are expressed as mean±SEM. n=8 in each group;*P<0.05 vs. I/R without ghrelin treatment group.

Ghrelin is an important hormone in regulating energy metabolism in the body. Studies have shown that ghrelin may have beneficial effects on left ventricular function and energy metabolism in CHF through GH-dependent mechanisms due to the hemodynamic and anabolic effects of GH/IGF-1 [21]. Besides having a stimulatory effect on GH secretion, ghrelin administration was shown to induce positive energy balance by stimulating food intake while decreasing fat use through GH-independent mechanisms [22]. Moreover, recent studies suggest that ghrelin possesses a variety of cardiovascular effects independent of GH secretion, including increases in myocardial contractility, vasodilation and protection from heart failure induced by myocardial infarction or septic shock in vivo [23].

Nagaya [24] previously reported that subcutaneous administration of ghrelin improves LV dysfunction and attenuates the development of LV remodeling in rats with chronic heart failure. In addition, a recent ex vivo study has shown that the administration of ghrelin during ischemia-reperfusion protects against myocardial injury, and this effect involves binding to cardiovascular receptors; a process that is up regulated during ischemia reperfusion [25]. However, still the mechanisms whereby ghrelin improves myocardial function and metabolism after I/R are unclear.

In this study, administration of exogenous ghrelin prior to reperfusion of transplant heart resulted in a significant reduction in myocardial injury identified by decreased serum Troponin-I level compared with mice subjected to cold I/R alone. Furthermore, our result has been demonstrated that the inflammatory response after cold I/R is reduced after ghrelin treatment in form of mediated by suppression of several pro-inflammatory mediators, including VCAM-1, IL-6, IL-1β, and this may explain how the ghrelin protected the myocardium after global hypothermia I/R.

While, Locatelli et al showed that administration of ghrelin inhibited myocardial MDA generation in a concentration-dependent manner, suggesting that ghrelin could potentially inhibit oxidative injury by acting as an antioxidant and/or by inhibiting the production of reactive oxygen species during reperfusion [26]. Production of reactive oxygen species during reperfusion is thought to be a major mediator of I/R injury, and other study suggesting that ghrelin might exert cardiovascular effects through mechanisms distinct from stimulation of GH release [27].

We have recently demonstrated that hypothermia myocardial I/R in wild type mice exhibit an active inflammatory reaction, associated with MCP-1 up regulation and leukocyte infiltration [28]. In this study the level of MCP-1 reduced after treating with ghrelin priors to the heart transplantation and also less monocyte infiltration. This result reflected that ghrelin produced myocardial protection by mechanisms of reduced the levels of MCP-1 and monocyte accumulation.

Rongqian  et. al. reported that the anti-inflammatory property of ghrelin is mediated through vagal nerve stimulation prevented the down-regulatory effects of ghrelin on inflammatory cytokines in sepsis, they suggest that the intact vagus nerve is essential to the inhibitory effect of ghrelin on the release of proinflammatory cytokines [29]. While others is suggested that ghrelin induced a marked increase in serum GH levels (15-fold), which was associated with slight increases in circulating epinephrine, adrenocorticotropin, cortisol and prolactin lead to beneficial haemodynamic effects in patients with CHF inform of significantly increased cardiac index and stroke volume index however; it did not alter mean pulmonary arterial pressure or pulmonary capillary wedge pressure, in the absence of renal effects.

Administration of exogenous ghrelin prior to reperfusion of an ischemic heart resulted in a significant reduction in myocardial injury as measured by cTn-I.  The reduced myocardial injury was accompanied by an attenuated tissue expression of several pro-inflammatory mediators; including IL-6, IL-1β, MCP-1 and adhesion molecule VCAM-1. Additionally, we observed that there is significantly less monocytes infiltration in the myocardium after ghrelin treated animals versus those subjected to I/R alone.

The authors declare that they have no competing interests.

FA, NY and AO, performed the statistical analysis, design study and drafted the manuscript. JC, DF, and XM helped with experimental design. All authors read and approved the final manuscript.